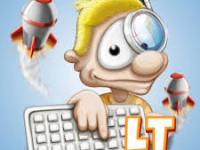 Typing App for Homeschool Education. Type and Play to Learn the Fun Way! And it’s FREE! From Typing Fingers.

It is through words we express ourselves and communicate. With the widespread use of computers for learning, writing, for school, work and even socializing, the ability to type is one that is not just useful but rather crucial. But it is not a skill we’re born with. It is one we must learn. And the earlier we can learn it, the better.

Typing while staring at the keyboard is like looking at your shoes while you’re walking! You can get from a to b, but it’s slow going. It’s much better to walk with confidence, looking up at the path ahead.

Being skilled at touch typing enables us to look up and – instead of focusing on the mechanics of typing – to move across the keys while seeing the bigger picture. It is widely observed that being able to competently touch type allows for increased accuracy and productivity.

Learning to touch type is an achievement in itself, but the results are much further reaching. Having the skill to express yourself quickly and accurately, you not only save time and achieve higher standards, but time and effort can instead be focused on other areas.

The ability to touch type paves the path to effective communication.

Typing Fingers……is the app designed to embed the skill of touch typing as second nature, and does so in a vibrant and fun way. Educational App Store Certified, Typing Fingers is aimed at beginners of all ages who are looking to achieve confidence in typing.

Type and Play to Learn the Fun Way!

Through a colorful, game-like environment, learning to type is both easy and entertaining. The Typing Fingers app has a colorful visual design and sets out clearly the positioning of where fingers should be on the keyboard, guiding the learner to do the same. Cartoon tutor, Dennis, guides students through the learning and assists in achieving the correct posture and finger typing motion.

By visually presenting the keyboard according to where fingers need to be placed, along with the image of moving hands over the keyboard, the learner becomes accustomed to the ‘zones’ and typing in a proficient manner. Through the tutorials and games, this becomes second nature.

Typing Fingers uses a modern teaching approach based on brain analysis. The symmetric method helps to activate both brain hemispheres equally in the process of learning and playing the game. The keyboard is symmetrically mapped (visually), and symmetrical patterns are repeated again and again during learning and gaming.

Typing Fingers is composed of a Learning mode, Play mode and Test mode, designed to build and test knowledge, skill and technique. The Learning mode teaches the various techniques for typing accurately and with speed, and the Game mode pushes students to increase speed and thus ability and confidence.

Soothing background music creates a relaxing atmosphere, perfect for concentration. Thirty-two tutor levels pave the way to utilizing all letters, numbers and common symbols. Once all tutorials have been completed, it’s time for the examination! Through a “rewriting an article test”, the learner’s characters per minute speed is measured. Once the final test has been passed, to evidence the learner’s achievement, a Foriero Diploma certificate is awarded.

The app is designed to be used with a keyboard, but can also be used on tablets with a wireless or USB keyboard.

Typing Fingers features a speed control facility and font adjustment. This can prove particularly useful for learners with Special Educational Needs, or any learner who would benefit from an adjustment of learning pace or visual appearance.

Homeschool at Any Age…

Studies have shown that below the age of 18 it is twice as easy to learn how to type. This highlights the importance of introducing typing into  curriculum early on. But typing isn’t something we’ve all been lucky enough to grow up with. There are adults too, who find the act of typing a challenge. Adults, don’t be discouraged. Typing Fingers works for you too.

Whether you want to introduce typing into your child’s education, or whether you want to learn useful typing strategies to build your own confidence and abilities, this is a fun and interactive way to learn, for all ages.

How to begin the adventure…

“Where can I get ‘Typing Fingers’?” I hear you ask.  Typing Fingers is available in all leading online app stores, including Google Play, App Store, Mac App Store and Windows Store. Written by Marek Ledvina.  Marek received his MA in IT from Technical University in Liberec. He privately studied opera for 10 years and is a piano enthusiast. He funded his own company that is creating educational touch typing apps for homeschooling, children and adults.

His message to the world is : “Never stop pursuing your dream.”- Marek Ledvina ([email protected])