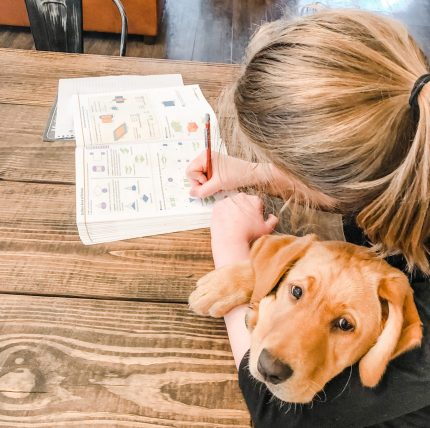 Our Homeschool Journey with Dyslexia

When I first started homeschooling, I felt pretty confident about teaching my kids to read, even my children with dyslexia.  After all, before I had children, my primary job had been teaching children with learning disabilities.  Teaching children to read was my specialty.  What could go wrong?  (Insert laughter from all the homeschool veterans).

Then one of our sons was born.  He was a happy baby and very healthy, but he didn’t start speaking when other children do.  Give it time, advised our pediatrician.  Children develop at different rates. Besides learning to talk, he was developing well, so there was really nothing to worry about. (Note: I have five children and I do not say by name which ones have dyslexia, to allow them their privacy).

My son didn’t crawl like other children, either.  He bounced on his butt with one leg forward and one leg back.  But he was very good at puzzles and he loved to figure out how objects worked.  We could tell he was smart.

By the time he was 2 ½, he still wasn’t speaking more than a handful of words and we were getting worried. I took him to speech therapy.  They said, yes, he doesn’t talk, but his receptive language (his listening language) is way above average.  He will learn to speak with some speech therapy.  And he did learn to speak.  When he finally spoke, he went quickly from words to entire sentences.

Fast forward to his first year of preschool.  His speech was really taking off, and he was good at sports.  He used advanced vocabulary, like “I’m ascending the castle.”  But we did have a few concerns.  He scribbled instead of drawing pictures.  He seemed to have a lot of trouble understanding what we said to him.  We got his hearing tested, but it was completely normal.

One of our main concerns was that for some reason he just could not remember either the names or the sounds of the letters of the alphabet.  I had been reading him baby books with the ABC’s since he was born.  We read Dr. Seuss’ ABC’s and Miss Spider’s ABC’s and Eating the Alphabet and Chicka Chicka Boom Boom. I played ABC games with him, and we looked for letters on signs.   His preschool also taught him the letters of the alphabet.  Sometimes he could identify the letters while we were playing a game, but then he had forgotten them the next time he saw them.

This memory issue went on through his second year of preschool, and then through a whole year of homeschooling kindergarten.  I was required to give him a standardized test for our state’s homeschool requirements, and he got above the 90th percentile for science, social studies, and math, (which were all read out loud at the kindergarten level).  He got below the 5th percentile for reading.

He just needs more time, I told myself.  Boys take longer at these things.  His speech was late, maybe his reading would be late, too.  Many homeschoolers delay reading until their children are older.  When I went to school, we didn’t even learn our letters of the alphabet until first grade.  But in the back of my mind, I started to suspect that he had some sort of learning issue.  I had worked with children who had dyslexia.  I knew the signs.  But I didn’t want to admit to myself that there could really be a problem.

Halfway through first grade, I started to panic a little.  How in the world could he not know his letters after all these years of learning?  Was it my fault?  Should I have even tried to homeschool?  Was I a complete failure at being a teacher and never even knew?  Did every other homeschool parent in the world know how to teach their child to read and I didn’t?  Would my son ever be able to hold down a job if he couldn’t read?  It’s amazing how many self-doubts we can have as homeschooling parents when in reality, we are doing a wonderful job.

I came face to face with the fact that my son was probably dyslexic.  It shocked and surprised me.  I didn’t know anyone in our family who was dyslexic.  In fact, of my son’s grandparents, all four of them had been teachers or professors at one time.  My husband and I both grew up devouring books.  Our house was crammed to the brim with books.  If there ever was a literacy family, it was us.

I did some more research into dyslexia.  Although I had taught children in school who were dyslexic, at that time there was no consensus about what caused dyslexia.  Most people thought it was a visual problem.  Others said that children with dyslexia did not learn to move correctly as babies, and needed a physical fitness program.  Some people thought it was a type of brain damage.  We know now that none of those things are true.  When my son was young, we did not have the world of information about dyslexia that we have learned just the past few years.

Approaches to Use with Dyslexia

I did know that multisensory instruction, such as they do in the Orton-Gillingham approach was the most successful treatment for dyslexia, so I pulled out a tray of sand and had my son trace his letters in the sand while saying, “B says /b/.”  I had him trace his letters on paper over a plastic screen.  We drew letters in the air and on the carpet.  And you know what?  It worked!  Within a few short months, he knew all the letters of the alphabet, and the sounds as well!  After all those years, he simply needed the input of his other senses to help him to remember the letters.   Oh, such relief!  It’s amazing what a little knowledge will do.  After he learned his letters, I taught him to read by teaching him phonics through multi-sensory activities and giving him letter tiles to spell words.

I have five children now.   Out of my five children, three of them are dyslexic.  One is very severe and the other two are moderately dyslexic.

The rest of our homeschool journey with dyslexia has been one of both ups and downs. I am very grateful to have had the opportunity to homeschool my children.  I can’t imagine what kind of experience they would have had if they had been forced to do work in a regular school environment.  Homeschooling has allowed them to move at their own pace, and to have the kind of specialized instruction that they need.

For any child with dyslexia, reading and doing written work is five times as hard as it is for most children.  But my children and I learned along the way together.  I did a lot of research over the years.  I tried different techniques with them.  But the main way I learned was that my children taught me how they learned.  When things weren’t going well, I pulled back and tried to figure out why things weren’t working.  I listened to their feedback and watched to see what worked and what didn’t work.  We learned together how to make things work.  It’s amazing to watch them grow and learn in so many different ways.

I decided several years ago that I wanted to share all the information I had learned about dyslexia with other parents who were homeschooling, or who are thinking about homeschooling.  I read a lot of books about dyslexia over the years, and they were all written for people who send their children to school.  They talked about IEP’s, (school plans for accommodations), and they talked about what to do when the teacher doesn’t help your child and how to advocate for your child.  What those books didn’t discuss was how to actually teach your child.  I couldn’t believe that no one had written a book about dyslexia for homeschoolers.

I decided that I needed to write a book myself, to help the other parents who had children with dyslexia.  I wanted to write the book I wished I had been able to read in the beginning when I first realized my son had dyslexia.  This book took me years to write, (at night, when my children were asleep) because our days were full of our homeschooling adventures.  Now the book is here, and I hope it will help a lot of people.

The book is called Homeschooling Children with Dyslexia.  It talks about what dyslexia is, what the researchers have learned, and how to know if your child is dyslexic.  I share with you everything I have learned over the years about what works with children who have dyslexia and what doesn’t work.  I talk about choosing a curriculum, and I talk about specific ways to adapt your instruction for your child, whether it is in reading or math or the other content areas.  If you are interested in my book, it is available on Amazon.

Homeschooling is a journey and it is a great adventure.  In my opinion, there is no learning environment that is as beneficial for a child with dyslexia as homeschooling.  There will be days that are hard but remember on those days that your sacrifices are worth it.  You are a great blessing to your child.

This is a guest blog post written by Valerie Arredondo.

Teaching a Child with Dyslexia

The Flip-Side Strengths of Dyslexia