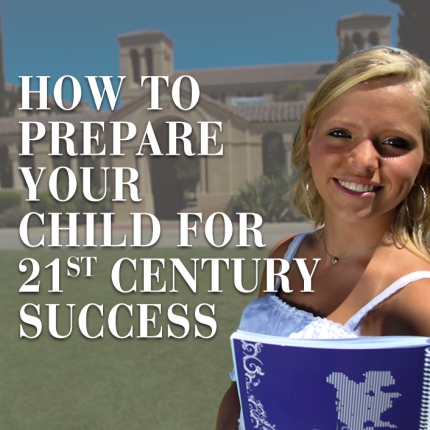 HOW TO PREPARE YOUR CHILD FOR 21ST CENTURY SUCCESS

Did you know that the American Association of Colleges and Universities found that employers considered fewer than 30 percent of recent graduates ready for work?

Did you know that over the next 13 years as many as 70 million workers in the United States (375 million worldwide) will be forced to find another way to make money because of automation and robots?

Did you know that in 1969, 7 percent of college undergraduates had grade-point averages of A- or higher; today, 41 percent do. The portion of undergrads receiving grades of C or lower has dropped from 25 to 5 percent.

Imagine if … your child was able to develop the skills that equipped them for success in the dynamic global society of the 21st century.

You don’t have to imagine it because the training that will give your child the skills needed to be successful is available now.

“We cannot build the future for our youth, but we can build our youth for the future.” ~Franklin D. Roosevelt

The “Framework for 21st Century Learning” was developed from 2002 to 2004 by the Partnership for 21st Century Skills (also known as P21). P21 was established in part by the National Education Association (NEA) to identify the skills needed to prepare students to function effectively in the 21st-century global society.

The skills determined to be most important became known as the “Four Cs.” They are, as follows:

Since SuperCamp launched in 1982, our primary emphasis has been to prepare young people for academic, career and life success. The learning and life skills boys and girls acquire at SuperCamp align remarkably well with the skills identified by the Partnership for 21st Century Skills, including the Four Cs.

This blog post examines the first of these skills—Critical Thinking—and what SuperCamp does to prepare teens and pre-teens in this important area.

THE FOUR COMPONENTS TO CRITICAL THINKING

In its Framework for 21st Century Learning, the NEA has identified four key components to Critical Thinking, as follows:

Critical thinking is an important attribute at college and in one’s career. Employees must exhibit critical thinking to better serve customers, develop better products, and continuously improve themselves within an ever-changing global economy. In a survey by the American Management Association, over 70 percent of business executives identified critical thinking as a priority for employee development, talent management, and succession planning. Just taking one component of critical thinking—successful problem solving—requires today’s employees to work effectively and creatively with computers, with vast amounts of information, with ambiguous situations, and with other people from a variety of backgrounds.

Young people can begin to acquire critical thinking skills early on in their academic life and can apply these skills across all subject areas, from Arts and Science to English, Social Studies, Mathematics, World Languages and more. In turn, they also become better able to develop other skills, including a higher level of concentration, deeper analytical abilities, and improved thought processing.

At SuperCamp, Critical Thinking is a fundamental part of our Learning and Life Skills training in both our Junior Forum and Senior Forum programs. Students learn that being successful on tests is more than just having a strong grasp on facts. Strategy is involved, as well. We show our campers how to use divergent and convergent problem-solving techniques, which helps them on standardized tests. But we don’t stop at academics. We also show campers ways that they can use critical thinking to overcome challenges in their everyday lives.

You can find out more about SuperCamp and our 2018 summer programs held on U.S. college campuses at www.SuperCamp.com.