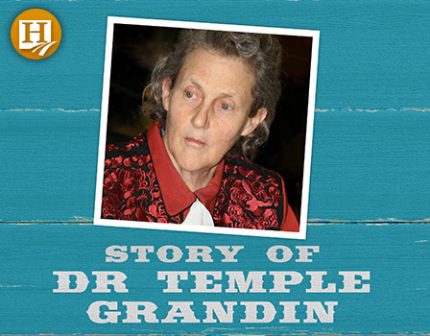 Are you homeschooling a child with autism? Autism has received a lot of media attention in recent years. Experts have come about with theories on what causes autism and how autistic individuals should live their daily lives. With the help of these theories and autism awareness endeavors, most people realize that autistic individuals emerge to achieve great things for themselves and the world we live in. One such autistic and inspirational individual is Temple Grandin.

Born on August 29, 1947, Temple Grandin was diagnosed with autism at age two. At the time, autism was considered a form of brain damage. Her mother, determined to find help and proper care for her daughter, sought out all possible treatments including extensive speech therapy.

This later proved to be significant in Grandin’s communication skills. By age four, Temple Grandin learned to speak well. However, she found it increasingly difficult to relate to other children her age in social situations like those at school. Unfortunately, Grandin was the target of much teasing because of her verbal tics and developmental delays. Eventually, she was able to attend a special school.

While she did have many great teachers growing up, the students continued to tease and make fun of Grandin – especially in high school. Because of this, she would often feel very out of place amongst her peers. At age 18, she invented a “hug machine” that was meant to calm hypersensitive individuals. Many scientific and psychological studies were conducted using the “hug machine.” Grandin’s own “hug machine” broke and she never bothered to replace it because she no longer feels the need for it, though she continues taking antidepressants.

Temple Grandin began speaking about autism publicly back in the 1980s. At that time, she met Dr. Ruth Sullivan at an ASA (Autism Society of America) meeting. At that meeting, Dr. Sullivan spotted Grandin in the crowd and pulled her aside. Dr. Sullivan asked Grandin if she would mind speaking at the next ASA meeting, and Grandin agreed. That was the first time Grandin spoke publicly about her issues. She spoke about her hypersensitivity to stimuli and explained how she is more of a visual learner than a verbal one. She was also able to give parents of autistic children hope that their children could one day lead high-functioning lives.

After she was featured in Oliver Sacks’s book An Anthropologist on Mars in 1995, Grandin gained some popularity. The book was named after the way Grandin feels in real life. While speaking out about autism, Grandin was able to educate many – especially parents – on what it’s like to live as an autistic person in this world. Today, Temple Grandin remains unmarried and without any children. She has received many honorary awards and achievements and has been featured on many television and radio programs.

Recently, a movie was launched about Temple Grandin and her amazing accomplishments…a must see, for families!

*By Jonathunder (Own work) [GFDL 1.2 (http://www.gnu.org/licenses/old-licenses/fdl-1.2.html)], via Wikimedia Commons

Jamie Gaddy, B.S., M.Ed., Ed.D. has been a college education professor for over 17 years. Education has been an integral part of her life in both the classroom and as a principal. Six children later found her dissatisfied with traditional schooling and homeschooling became the better fit. She is also a pastor’s wife, remote project manager, and entrepreneur who now homeschools four of her six children (ages 11-17) in southern Georgia. Jamie loves to share about her homeschool experience and help other homeschoolers find success. Connect with her at [email protected]