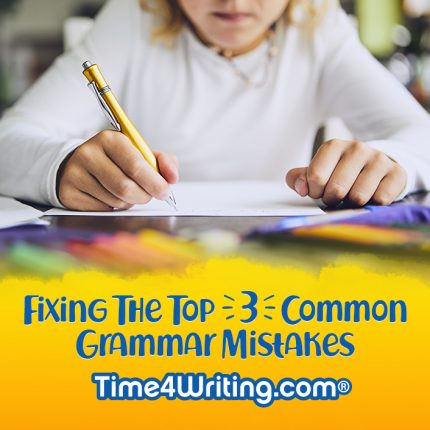 My youngest daughter marches to her own beat. Signing her recent driver’s license permit, she used the lowercase for the first letter of her last name. What was her reasoning when my face showed confusion? “Motherrr, everyone uses upper case; it’s so boring.”

Okay, teenage angst aside, I understand, in a way she doesn’t, the importance of creating a great first impression with the written word. Parents want their children to have the tools to create great resumes, cover letters, college entrance essays, etc.

Our kids need decent grammar skills to make all of that happen. Grammar is tricky; one simple mistake and your sentence could have a whole new meaning. A common example of this is “Let’s eat Grandma” as opposed to “Let’s eat, Grandma.”

Let’s take a deeper look at the most common three mistakes we see, along with some usage examples.

One of the most common grammar mistakes is confusing words that sound alike but have different meanings. They may sound the same, but they can’t be used interchangeably. Let’s take a look at some of them and their most common uses. Keep in mind that these aren’t the only way that some of these words can be used, but they’re good starting points to learn the basics.

Your is the possessive form of the word “you.”

You’re is a contraction of the words “you are.”

To is a preposition that indicates moving toward something.

Too is an adverb that can mean either “also” or “excessively.”

Two is a number that is one less than three.

Their, there, and they’re:

Their is a possessive pronoun that refers to a subject mentioned earlier.

There is an adverb that describes being in a location or direction.

They’re is a contraction of the words “they are.”

These can be tricky, so start by explaining how the apostrophe changes the meaning of the word. You can explain that adding the apostrophe makes a noun possessive and shows ownership, while a noun with an “s” added and no apostrophe is plural, meaning that there’s more than one of that person, place, or thing. After that, work on singular possessives. Remind your student to always use the apostrophe before the “s” when there’s a singular noun possessing something.

Once your student has singular possessives down, move on to plural possessives. Make sure that he or she knows to use the apostrophe after the  “s” when the possessive is plural.

There are only three main ways commas are used, yet even those three can take a little bit or time and thought to master. At their most basic, they’re used to separate words in a list; but things can get a little more tricky after that. Take a look at the following examples.

For a series of items:

For the separation of independent clauses:

After introductory words or phrases:

Although these mistakes are common, keep in mind that practice really does make perfect. Reinforcing the correct way to use grammar and mechanics will keep the knowledge present for your student and build up the skills he or she needs in the future. For further reinforcement, consider taking an 8-week online writing course from Time4Writing. Certified writing teachers provide guidance and feedback for students at every grade level, and work to help students develop skills from grammar and mechanics, to paragraph and essay writing.

Time4Writing offers 8-week online writing courses for students in elementary, middle, and high school. Each interactive course is led by a certified writing teacher who gives prompt and personalized feedback on all assignments. Courses are accessible 24/7 from any device with an internet connection and come with a 14-day money-back guarantee.