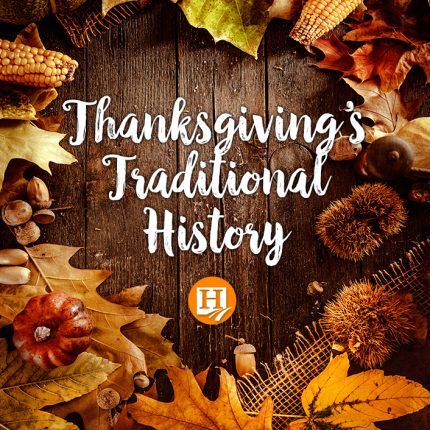 Giving thanks didn’t start with the pilgrims at Plymouth; it had always been a part of Wampanoag daily life. The native peoples have always had celebrations of giving thanks for times of successful harvests, the hope of a good growing season in months to come, and other times of happiness such as the birth of a child.

Not surprisingly, then, the Wampanoag peoples also gave thanks for successful crops. The year 1621 was particularly special to them. After nearly a year of scarcity and not knowing whether they’d have enough to last the winter months, they were blessed with a bountiful supply of food. The people gave thanks to God and celebrated with feasting and recreational games. Since the Wampanoag were a native people group with a strong Christian faith, they gave God credit for everything positive that took place. It was truly an outpouring of gratitude.

When the Pilgrims arrived at Plymouth, it presented a predicament for them. They arrived not really knowing how to fend for themselves in all ways. Sure they could build houses, but that would take time and materials they didn’t have aboard the Mayflower. And, what were they to eat since it takes months for crops to be ready to harvest?

Of course, there were Native Americans already occupying the lands. However, the Native Americans were scared of the Pilgrims and thought of them as potential enemies. The feeling, in the beginning, was mutual.

The Native Americans – who were so bountifully blessed that year – decided to set aside any differences and share food with their Pilgrim neighbors. So, instead of battling and fighting, the two sides broke bread together – literally. That first Thanksgiving set the precedent for what Thanksgiving is today: a time of feasting on food that is in abundance and a time to be reverent and give thanks to God.

Abraham Lincoln, in a proclamation made in 1863, declared Thanksgiving would be a national holiday. He designated that this day of gratitude would take place on the fourth Thursday of each November. Throughout the years, families have continued to celebrate Thanksgiving on this day. Today, we’ve gone from simple gratitude to large displays of thankfulness. For instance, parents may have children create a “thankful tree” to display to guests the things for which they are thankful.

The first Thanksgiving may not have had the same foods we think of today when we picture this glorious holiday, but the meaning is still the same: we want to be thankful for what we do have and we give thanks to God for those blessings. Toss in some family traditions and you’ve got yourself a wonderful holiday that’s worth remembering!