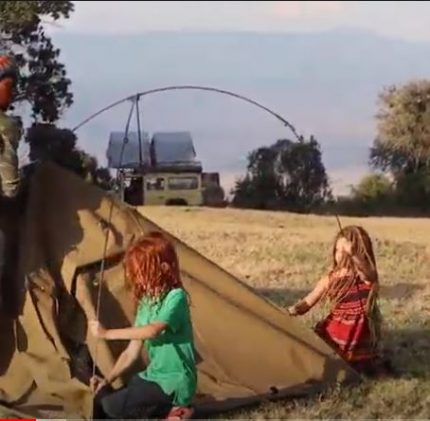 How a Safari Taught Us to Live in the Moment

Quite often we avoid doing a thing because we believe it has to be done a certain way. We fear the experience will be lesser, and therefore not worth it if we can’t afford all the bells and whistles. We put off what could be done now in the name of doing it “the right way,” someday. Living in the Moment changed that.

“Someday” is a dangerous word. Even more dangerous when we assume our children will just stop growing up while we get all our ducks in a row.

Through all the twists and turns of 2020, we found ourselves in Tanzania, the number one place in the world for a safari – something we had always dreamed of doing. If you don’t already know, safaris are not cheap. Even a “budget” safari can be thousands of dollars per person. As much as it stung, we had surrendered to the idea that we couldn’t afford to take one now, maybe someday… But how could we bring our kids all the way to Africa and not take them on a safari? Would you go to Egypt and not see the pyramids, or visit Peru without hugging a llama? I think not.

We decided this had to be our imperfect, unprepared someday.  So we turned to our local contacts and found out how the locals did it. We learned what corners could be cut, and how to eliminate multiple layers of middlemen and foreign business interests. With local help, we pulled it together and were able to afford to take our kids on a 4-day camping safari. By camping, I don’t mean some cool safari tent with white sheets and cucumber water like you see in the ads. I mean pop up tents and sleeping on a mat on the ground. My six-foot-four husband slept in a secondhand child-sized Bratz sleeping bag, curled up to make sure he fit his whole body in the tent.

As it turns out, however, none of the extra “bells and whistles” could have made this adventure any more special. In fact, I think we would have lost so many of the epic experiences we had if we had been in a lodge sipping cocktails instead of being fully immersed in nature.

Epic Is As Epic Does

We saw all kinds of animals and had some epic experiences:

We definitely got up close and personal with the wildlife, and it was all super amazingly spectacular, cool, and mind-blowing. These experiences may have never happened if we waited until we could afford the big expensive safari. (If that “someday” ever came.) These experiences happened because we made the best of what we had.

While animals are cool and all, let’s not forget just how amazing the rest of nature is as well. Our guide stopped one day so we could get out and see a Baobab tree, often known as the Tree of Life. If you have never seen one. They are massive. This one had a hole worn into it by elephants sharpening their tusks. The hole was big enough to easily fit over a dozen people inside the tree. For me, one of the most epic things was getting up at 5:30 in the morning to watch the sunrise over the Serengeti. You know that opening seen in The Lion King. We lived that. I even sang the Circle of Life at the top of my lungs. Probably scared off a few wildebeest, but it was totally worth it.

As a homeschool parent, I’m sure you have taken your kids to the zoo on a Tuesday to avoid anyone else being there; but then it turns out to be the field trip day for like six different schools and you go into a self-righteous internal rant about “other people’s kids.” Yeah, I do that too. I love having places all to ourselves. We heard stories of the lines and lines of safari trucks trying to get down the roads and grab a view of the animals. People are not really traveling right now, which meant we experienced nothing but open roads. A few times we chose to caravan with one or two other safari trucks just to keep each other company and have more eyes on the look-out for those hard-to-find leopards.  Not only would we not have experienced this if we had waited, but there might not be another time in our lifetime when this is even possible.

Alejandro and Arabella are both in Cub Scouts. Our guides were like scouting superheroes to them. They watched them fix the truck on more than one occasion. Once with only a rock as a tool. On route to Serengeti, we came across a truck overturned on the side of the road. Our guides used their first aid skills to pull people to safety and attend to their (luckily) minor injuries. Each night the kids helped pitch the tents, cook dinner, and set the table; while the guides told stories of the many times they climbed Kilimanjaro. Now our kids dream of climbing it themselves as soon as they are old enough.

All this awesomeness and yet, we almost said, “Not this time. Maybe later when we can afford the comfortable bed and gourmet food, and momma can get a cocktail.” How old would the kids be when that day came, assuming that day ever came? 2020 was a whirlwind of feeling completely out of control of our lives, and 2021 isn’t looking very different; but a good year or bad year, time doesn’t care, time is going to keep moving. Make the best of it.

Best wishes to everyone out there. We hope that 2021 presents you with many opportunities to make memories with your children. Whether they are small moments or epic safaris, don’t let them escape you. Happy New Year.

The Esteves family left the states in late February to travel the world full time. Just three weeks later Covid-19 hit and changed everything. They ended up spending 7 months in Mexico having some amazing adventures. Recently they made the jump to Tanzania Africa where they are living more like locals and less like tourists in an effort to give their kids a more unique and in-depth cultural experience. Share in their adventures as they document both the good times and the fiascos while navigating their way around the world in these uncertain times. Their YouTube channel is Culture Trotters. Get daily photos of their experiences on Instagram @culturetrotters.