Adventures of the Elements

Adventures of the Elements Ages 3-12 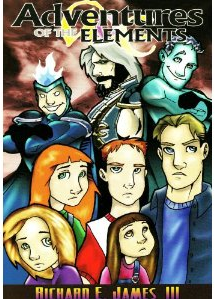 Adventures of the Elements uses a multi-sensory, scientific trading card game, professional development, an adventure book series, colorful periodic table poster, and interactive educational resources to provide effective and efficient science instruction. AOE educational products are a unique and effective way to introduce children to scientific terminology and concepts while incorporating other academic subject areas such as history, English and the arts.

In the Adventure of the Elements books, five siblings find a box buried in their back yard. When they open the box, they find “element glasses”. Every time they wear the glasses they see elements, including element guardians and element villains. “Any time you wear your element glasses, Ollie Oxygen, Holly Hydrogen, or I ….will be here….”

The element guardians look and dress like superheroes, while the villains, such as Urban Carbon Monoxide, Litharge Lead Monoxide, Dert Phosphate, and the Sultan of Sulfur Dioxide are very frightening in their appearance.

When villains do appear, something similar to the following usually occurs–

“By the properties of the Group 18 noble gases, I summon xenon,” roared Xerxes Xenon, unleashing a green blast from his fists.

“By the properties of the Group 15 nitrogen family, I summon nitrogen,” yelled Ned Nitrogen, rapidly firing an icy vapor from one hand and then the other.

“By the properties of the Group 14 carbon family, I summon carbon.” Carl Carbon ran toward the door, holding his shield before him.

“By the mysteries of my adopted alkali metal family, I summon the power of the sun and stars. Let there be hydrogen,” cried Holly
Hydrogen. Wind swirled around her. 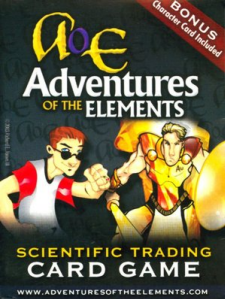 Kids like the characters, and they learn information such as–

When a car is idling needlessly, and creating pollution– We have to shut off the car. Urban Carbon Monoxide is feeding off it. Not only is the internal combustion engine releasing more carbon monoxide but the engine is also consuming oxygen.

“What about Dert Phosphate?” asked Richard, staring at the oozing greenish glop sinking into the ground. “Oh, him,” said Holly Hydrogen, giggling bashfully. “He is nothing more than phosphate fertilizer. When phosphate interacts with enough hydrogen, it turns into fertilizer. All I did was make sure Dert Phosphate received a large dose of hydrogen. That is Dert Phosphate’s greatest weakness.

Also, the book series is part of the Accelerated Reader program.

Other AOE products include–

The AOE video on their website–the one with first graders learning about Chemistry and having fun, is very impressive. The adults associated with the children (school administrators and Scout leaders) are VERY enthusiastic about the AOE products. To see this video, go to http://www.adventuresoftheelements.com/ . Click on Media at the top of the page, and then click on the second video under AOE Videos. I suggest anyone interested in these products, watch this video. It will sell you AOE!

Books are available for Kindle and iPad through Amazon.com. Their facebook page is www.facebook.com/AoE.fans.