Have your homeschoolers studied Earth science yet?  This branch of science, also known as geoscience, is an incredibly relevant area of study, and worth learning about!  Earth Science Week will be celebrated from October 13th – October 19th in 2019, and we couldn’t be more excited to compile a related unit study!  What better time to explore Earth science than now?!

I know, I know; most people don’t find science to be the most fascinating subject, and earth science hardly sounds like more than a study of rocks.  While geology is one of the biggest areas of earth science, there is so much more to this branch of science than just rocks. Earth science provides the answer to all the questions about what goes on in our world!  Weather forecasts, natural disaster preparation & recovery, physical science, sustainable sourcing, even the healthy vegetables we eat, are all a result of earth scientists. At its roots, Earth science examines the world we live in for everyday, practical applications.

There are four general branches of Earth science: oceanography, astronomy, meteorology, and geology.  Geology is by far the largest component of earth science, as its very name implies, “Study of the Earth.”  Geology covers the layers of the earth, the composition of the soil, life on the planet, changes that have occurred over time, and the search for fuel and minerals.  All things considered, even geology is about more than weathered rocks!

The History Behind Earth Science Week

There are numerous sponsors in the geoscience community helping provide events and activities for this year’s Earth Science Week.  The basis of this celebrated week is to promote an appreciation of its value as it relates to the world in which we live. Earth scientists hope to show how this branch of study applies to our daily lives and impacts everyone.  There is potential for anyone to become involved and succeed in Earth science, which makes it one of the most welcoming studies available. 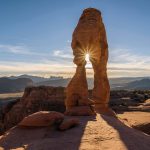 The main objectives for Earth Science Week are to help individuals become engaged with the geoscience community by reminding the world that areas of Earth science encompass our everyday lives.  Further, this week is to encourage improved care of the Earth and to hopefully motivate current geoscientists to share their findings and work, as possible, with the world.

2019’s theme for Earth Science Week is: “Geoscience is for Everyone.”  This year, each day of Earth Science Week will have a dedicated theme. These are called “Focus Days,” and is a great way to create a specific topic for each day.  This is an excellent setup for a unit study!

Here are the themes for each day this year:

Along with focus days, students can celebrate Earth Science Week by entering a few different contests!  These contests require a variety of mediums — written, video, or visual — and raise the stakes of your Earth Science Week participation!

Each contest is due by 5pm EST, Friday, October 18th.  Here are the current existing contests:

Why Is It Important to Study Earth Science?

Some of the benefits of Earth science are self-explanatory.  For example, most people probably associate earth scientists with improved warnings, prep, recovery, and study of earthquakes.  Further, a lot of people likely realize the connection between earth science and the effects of erosion that lead to avalanches and flooding.  However, the importance of earth science extends to so much more than this.

Our world is rapidly changing, and earth science helps us keep up with it.  Earth science isn’t just about the layers of the earth’s composition and determining types of rocks.  Geoscience does analyze these aspects of earth, but it also studies the atmosphere, the oceans –even space– and more.  Earth science offers an explanation of the world around us, and answers to phenomena we experience daily throughout the globe.

Not only is Earth science relevant to our everyday lives, but it is one of the most hands-on branches of science.  This study of life science offers opportunities for both labs and activities, which can make it more exciting and enjoyable for students thanks to the visual results.  Geoscience evaluates where we come from, what is going on now, and what is likely to happen in the future. As a result, earth scientists are continually looking for sustainable options in all areas affecting our planet –our only home.  To be succinct, here are five reasons Earth science is important to study.

10 Facts About the Earth for Earth Science Week

When we depend on something, we usually do everything we can to protect it and make sure it stays around for a while.  For example, adults depend on their paychecks and consequently aim to do well at their work so they can keep their jobs.  As much as most students may not enjoy schoolwork, we know that the diploma will be worth working hard and ensuring good grades.  The same can be said for Earth. It’s our home, and we depend on it for our survival. Because of that, we need to study Earth so we can learn how to maintain our home for the foreseeable future.

Earth reveals where we came from, thanks to fossils and rock formations.  Similarly, studying our planet can reveal its current state of “wear and tear” and give us a trajectory of how long certain resources will last if nothing changes.  That can give scientists both good and bad news, but the bottom line is that we’d never know what to do (or what not to do), if we didn’t study Earth, to begin with. 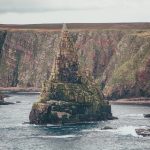 Here are ten fascinating earth facts about our planet to kick off your unit study!

As the only known planet with life, Earth is fascinating!  What better way to learn than while you are having fun and experiencing it firsthand?  There are hundreds of fun geoscience activities for kids available online with a quick Pinterest search.  My favorite aspect of these activities is that they work well for nearly every learning style!  They combine a variety of hands-on, visual, and auditory steps. This is such a great way to help involve all of your children in the learning process.

Let’s grab our household items and learn together about the Earth’s climate, weather, erosion, earthquakes, and more!

To wrap together your Earth Science unit study, we have created these printables as the cherry on top!  Printables are often a great way to add extra fun with games, while also focusing on direct learning. For this unit study, you’ll find a book report, flashcards, puzzles, and even graphic organizers all ready to help you study geology!

Additionally, we have a free printable science journal!  This journal is 12-pages long, and it explains the scientific investigative process for experiments, large or small.  This would be especially helpful for older students as they start documenting labs or entering science fairs! 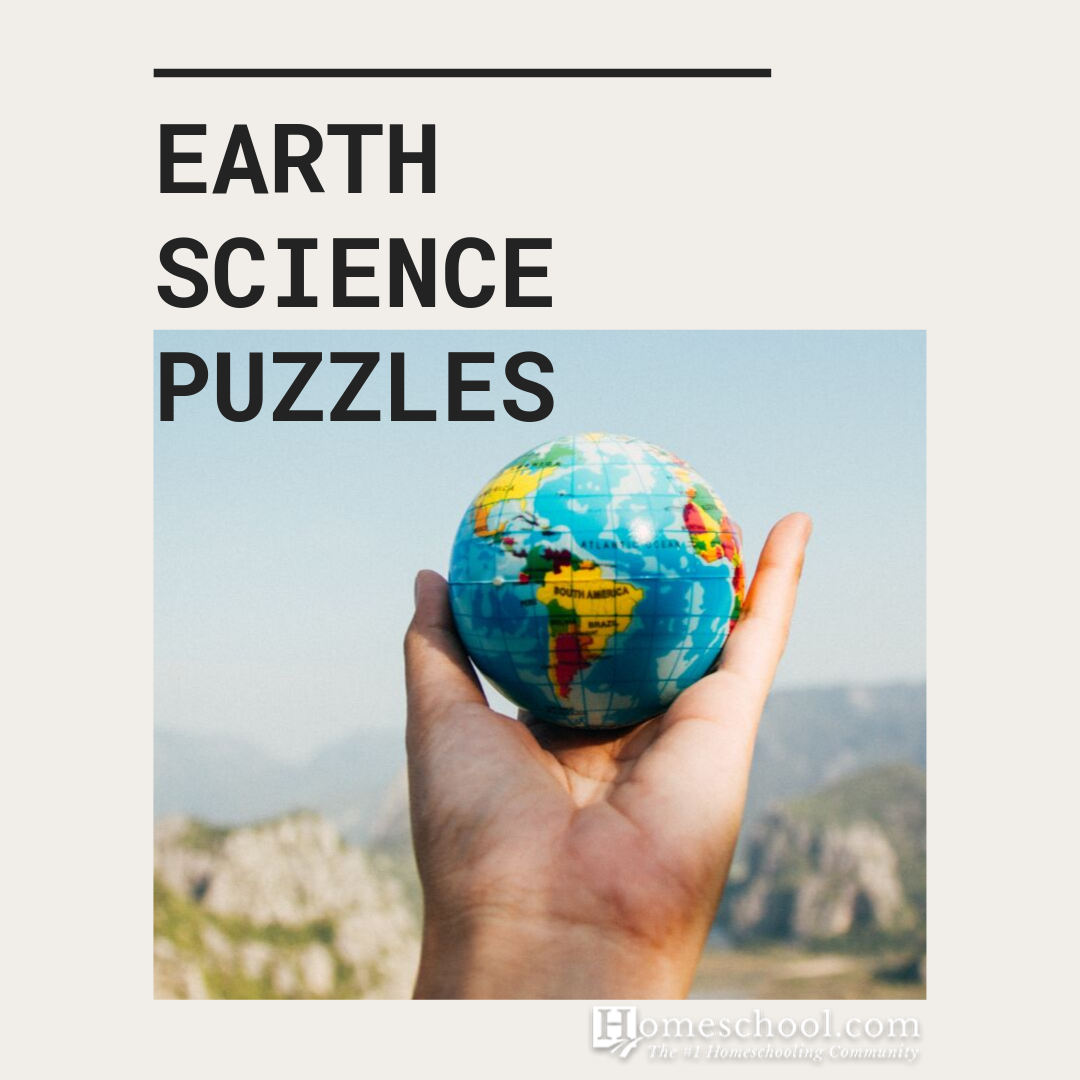 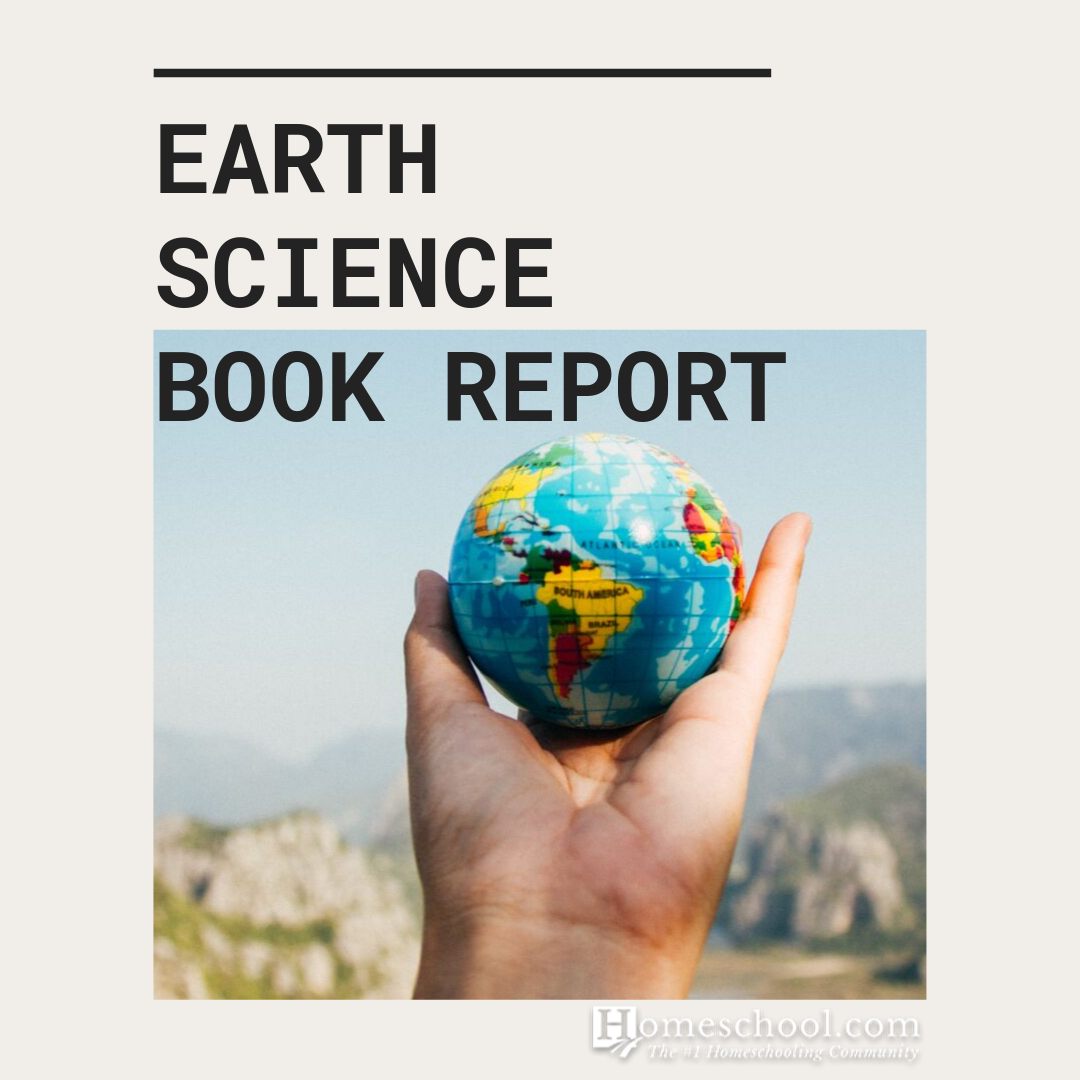 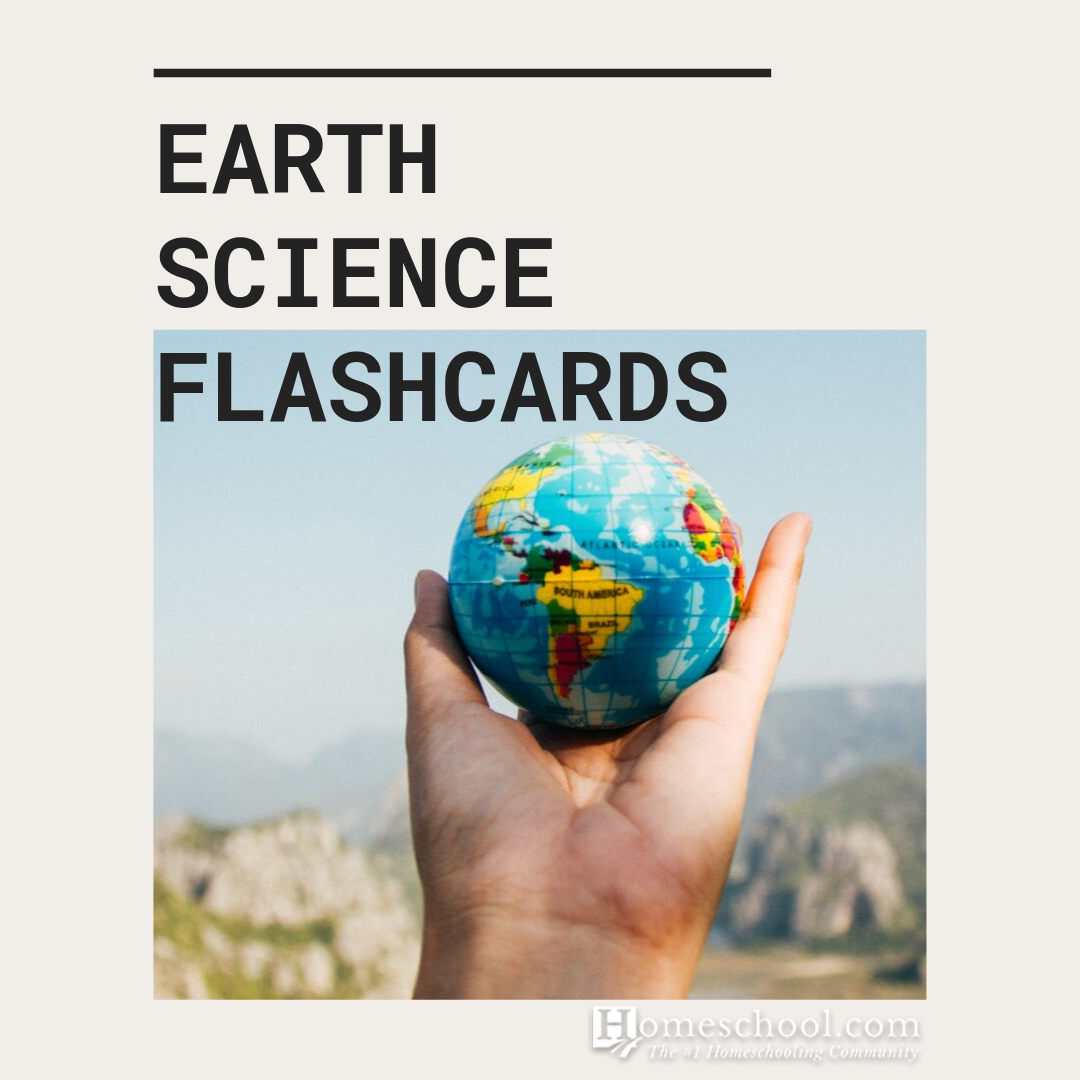 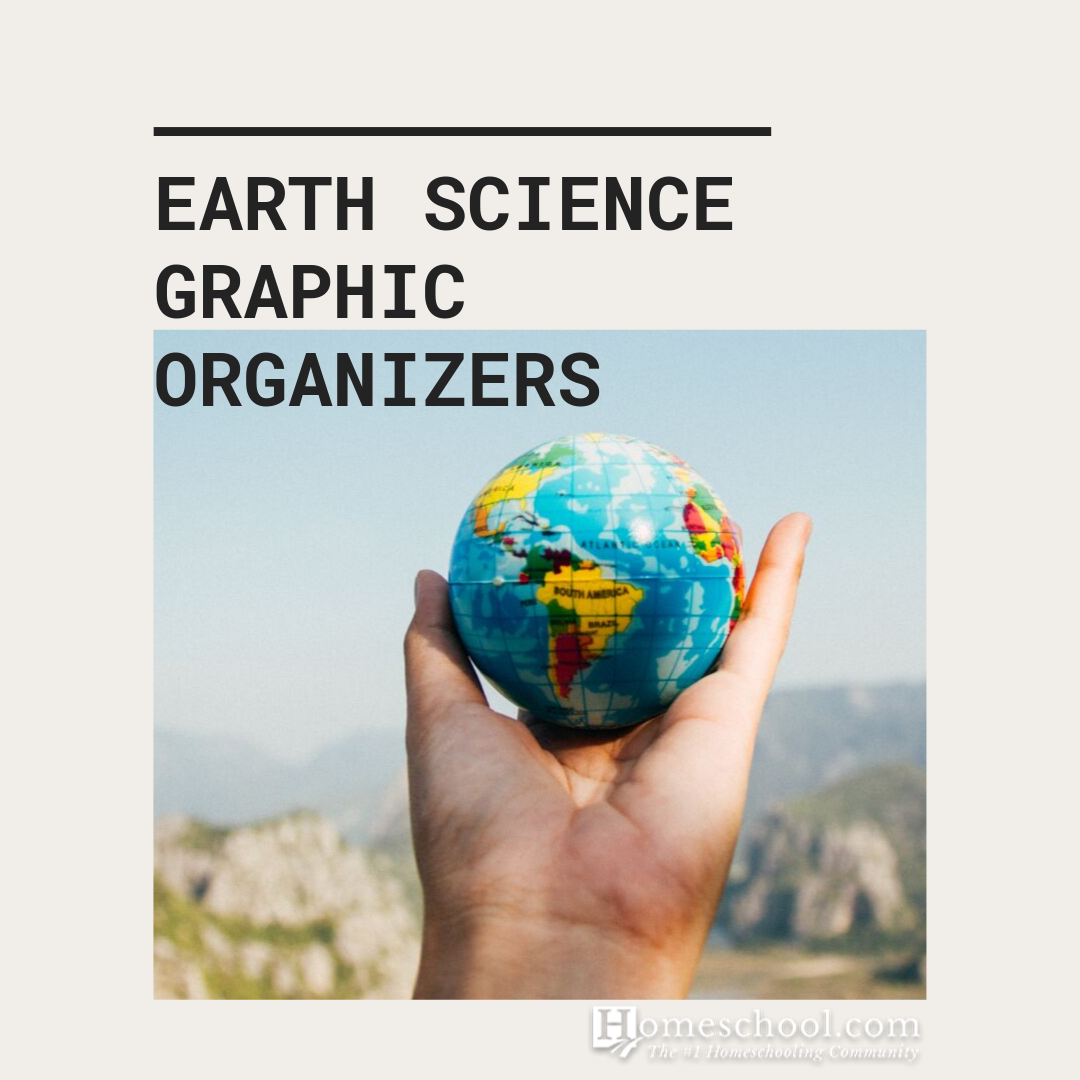 The Geoscience community needs students who haven’t been held back by restrictions or limited by narrow averages.  They need students who dare to consider something different than what we know, and students who are brave enough to go for it anyway, regardless of challenges.  Earth scientists need people like homeschoolers!

At some point, the honeymoon phase of a new lifestyle choice inevitably ends. The excitement wears off, the fun becomes routine, and the adventure…