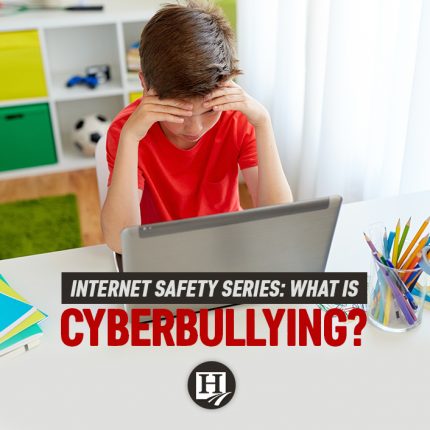 Internet Safety Series: What is Cyberbullying?

Cyberbullying is no different from regular bullying except that it occurs over digital devices. It can occur through text messages, on social media, and through private messages (such as DMs on Instagram or Messenger on Facebook, etc.). It can also occur on privately-run blogs and websites.

But what is cyberbullying? Anything posted or shared that is negative, harmful, threatening, or mean. It can also include sharing private information (for instance, sharing screenshots of private messages) that ends up causing another person to feel humiliated or embarrassed. Some instances of cyberbullying cross a line into unlawful or criminal behavior.

Cyberbullying isn’t just harmful to the victim; it’s also harmful to the bully. This is one area cyberbullies don’t seem to stop and think about before blasting people online. Not only are they harming another person’s reputation but they’re also making themselves look petty, mean, and aggressive to potential employers, friends, family, etc.

Cyberbullying, though it occurs online, is just as harmful as bullying that takes place in person. Since it’s so dangerous, is there anything parents and teachers can do to keep up a safeguard for children? Stay tuned – our next installment will discuss just that!