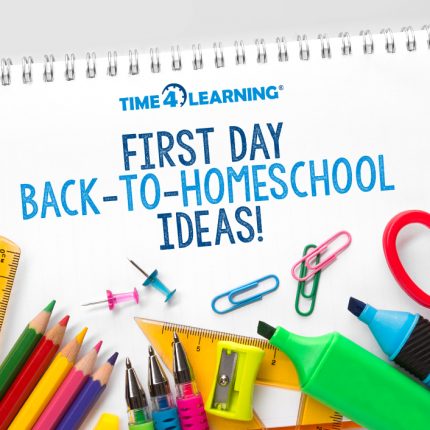 I must confess: I have mixed feelings on most first days. I am super psyched but also incredibly nervous. I make sure my kids are prepared for the upcoming year by keeping them learning throughout the summer, so they kind of know what will be coming, but I still want the “official” first day to be special.

When my kids were younger it was a bit easier. They loved the little entertaining and educational ideas I created for them. As they grew older though, things became more challenging. Middle school and high school kids have different ideas about what’s cool and not cool, and each year or two, I found that what was cool suddenly became not-so-cool.

One thing before I share my ideas with you, as we know, each child is different and you understand your kids better than I do. With that in mind, these ideas may or may not work for your kids but at least will give you a starting point.

The elementary school years include very young kids and older kids who have started to form an identity. The first day ideas I came up with will include a few for each. It may seem like a lot of activities for the first day, but I varied them depending on their age range.

First, second, and third graders: When my children were young, we always started off the new year by naming our school and choosing a mascot. One year we created and printed out school ID cards and placed their photos on them. It was so exciting! They loved having an ID card that made them feel like they were “grown-up and important” as my one son said. We always celebrated with a lunch party that included their favorite foods like PB&J sandwiches, cheese doodles, and sliced fruit (had to throw something nutritious in there!). As the week progressed, I helped them set up their workspace, which in our case, was a small area with one large table, shelves, and a closet. We played music, sang songs, danced, and I read their favorite stories out loud.

Fourth, fifth, and sixth graders: We still named our school and chose a mascot, but as they got older and a bit more behaved, I also took them shopping for a special school gift. My one son always wanted his own lunch box and in the fifth grade, he received his first, (I still have it!). The gifts were always school-oriented. We went on field trips, visited the local state park and noted all the wildlife we saw, and weather permitting, prepared a picnic lunch. We set up our work area, as we did since the first grade and, decorated the classroom.

By seventh and eighth grade, my kids were not interested in ID cards, singing songs, or parties. My little ones were growing up fast but they still wanted fun, and I still wanted the first day to be special! So, I did what we homeschoolers do, I talked things over with them, improvised, and made a plan.

Workspaces: As my kids got older, they wanted their own private spaces. We don’t have a huge home, but we did have separate “areas” where they could study. My daughter liked her room, and my oldest son preferred the family room. They would spend a good part of the first morning setting up their own areas. They enjoyed modifying their own spaces according to their tastes and interests, As an example, my son plays guitar and loves nature so he put rock star posters on the walls and set up his computer in a little nook where he could see out the window.

Group lunch: My daughter had begun learning Spanish and we found a quaint Spanish restaurant in our downtown area. She would actually speak a little Spanish with the owner, who is a wonderful woman that encouraged my daughter and helped her with pronunciation. My sons enjoyed the food so it made the perfect little getaway for the four of us. It was also incredibly affordable! We ate four big meals and had leftovers, which they all devoured as a snack after school.

Team meeting: With my kids growing older, I expected more input from them. We focused on their goals and their evolving interests in subjects, like art history and robotics, that went beyond the core curriculum. I let them speak about the pros and cons of homeschooling, which I’m glad were mostly pros and anything else on their minds that touched on their education.

When my two oldest kids first started high school things changed. They were becoming independent, except for my son, who still liked interacting with me. I also quickly realized that they were two different people that worked at their own pace and on their own schedule.

Scheduling: It became abundantly clear that my kids produced their best work at different hours. My daughter works best in the morning and my son in the late afternoon and evening. I give them leeway but expect all their work to be done on time or they lose the privilege of creating their own schedules. We talk about scheduling in the summer then hammer out the details for an hour on the first day. This schedule works for me as well since I can put in some hours for my job. It also works because we use an online curriculum that encourages independent learning. My kids can log in at any time and there are no strict schedules. That’s a win-win situation for me!

Apps:During the summer, I ask my kids to find some educational apps that they enjoy—it’s just a little fun assignment. On the first day, we discuss the apps and they give a little presentation on them. It’s really cool and they enjoy doing it. Sometimes they actually get competitive and rate each others performance! Between the online curriculum and apps, I am relieved of teaching lessons that I don’t always fully understand. At first, I felt guilty but quickly realized after speaking with my homeschool friends that I wasn’t the only one relying on technology when it came to tricky subjects.

Homeschool “launch” party: Over the years, we’ve met other homeschoolers and made some good friends. One day during the summer, before our kids were starting high school, we decided that it would be cool to have a group party on the first day—just a casual lunch party where everyone brought food, similar to a potluck. It was soon labeled the annual “launch” party instead of lunch party. I know, it’s corny but we have fun with it; it sets the tone for the new year and it truly is a blast for all involved.

It’s funny, after all these years I still get some butterflies on the first day, mainly because I always believed that I was the “tone-setter” for the new year. As my kids grew older, they began setting the tone and taking more control, although they still needed me! And, after all these years, the first day is still a big day, and we make it a celebration as a team—a team that cares for each other and shares the same main goal: a fun and inspiring educational experience.

#BACK TO HOMESCHOOL, #TIME4LEARNING.COM