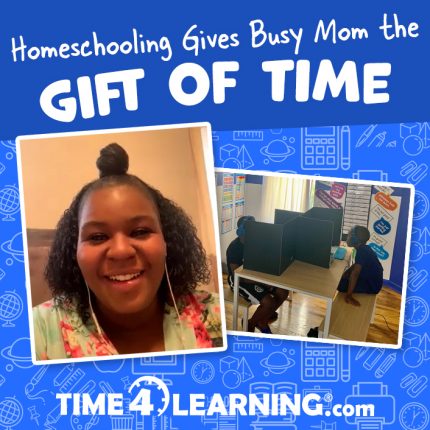 With four children, including a newborn, and a busy work schedule that started at 5:00 a.m. and ended late into the night, New York City resident, Shantasia, had a lot on her plate just over a year ago. But it wasn’t the hectic schedule that was stressing her out, it was the fact that she was missing out on the opportunity to spend quality time with her children. “I felt a lot of guilt,” she says.

Shantasia knew exactly what her children were going through. She was also raised by working parents and so she longed to be a stay-at-home parent, attending PTA meetings and baking cupcakes. “I wanted that for my kids,’ she says. “It was just a matter of trying to make their childhood better.”

Making the Decision to Homeschool

Over the years, Shantasia had been interested in homeschooling due to the freedom and flexibility it provides to busy working parents. After her husband discovered Time4Learning online, they went back and forth and wondered if it was something they could do given their busy schedules. Like many parents, they pondered if one would need to leave their job to have time to homeschool. Then the pandemic started, which led to steep challenges with remote learning. With one child on the autism spectrum and another with ADHD, Shantasia recalls, “It just did not work for them.”

Having to juggle school closures, conflicting news reports, checking in for assignments, and all the constant changes taking place, Shantasia knew there had to be a better option. “I hated it. It was awful,” she says. That was when she knew she had to give homeschooling with Time4learning a chance. She watched the demo videos on the website and researched how to withdraw her two boys from school. “The pandemic was really what gave me the shove to do it, but it (homeschooling) was something that I had been considering for a while,” she says.

The family decided to give remote learning a chance, so Shantasia and her husband decided to let the kids finish the school year. After all, there were only a few months left. She sent a notice of intent to homeschool to the school district and an individualized home instruction plan (IHIP), both required to homeschool in New York. She found the process complicated and couldn’t find help on how to create one, so she turned to other homeschoolers for assistance.

Taking the Plunge with Time4Learning

A few months later, the family began their homeschooling journey. One of the first takeaways for Shantasia was the flexibility they now had, and how helpful that flexibility was in the first few months with their newborn baby. Shantasia appreciated not having to be “pigeonholed” to a schedule. If the baby kept her up in the middle of the night, they could start a little later and sleep in. For her oldest son, who suffers from insomnia, being able to work on his schedule was also a game-changer. Shantasia recalls one day when he woke up at 4:00 a.m. and he got online and started doing his work.

As far as their experience with Time4Learning, Shantasia can’t say enough good things about the program. “I love it,” she says. From the flexibility of the program to the built-in reports to the curriculum itself and how much her boys are enjoying it. “It’s so much fun for them,” she says. They don’t see it as a chore.

Another important aspect that she’s really come to appreciate is how the program teaches and explains concepts in an easy-to-understand manner. “I like how Time4Learning teaches them.” She says it’s so much more than watching videos and answering questions. She loves how the curriculum explains why an answer is wrong, even why it’s right, and how students are asked questions again differently to make sure they actually understand. “It’s really teaching the kids,” she says.

Her favorite feature is the reports tool. Shantasia recalls trying other programs that weren’t very helpful for parents in terms of gauging where students are having difficulty. “With Time4learning, I get details on what they’re doing,” she says. These details include not just their grades, but also how many times they attempted a particular activity, quiz or test. When she checks the reports, which she usually does every Sunday, she can clearly see the difference in grades and how they have improved with each subsequent attempt.

Shantasia also loves the flexibility of being able to skip lessons or even move to the next grade level if her children have mastered a particular concept. “I love how it’s easy, but then you have the ability to make it what you want,” she says.

Homeschooling also led Shantasia to question why kids have to be in school for so long. She was shocked at the actual learning time, saying that they are usually done with their day by lunchtime. “You have so much extra time,” she says. She’s teaching her 10-year-old how to cook and make waffles, something they wouldn’t otherwise have time to do if it wasn’t for homeschooling. “I enjoy the fact that I get to spend more time with them, and I get the time to teach them,” she says.

Shantasia couldn’t be happier now that she gets to be home with her children. She can’t imagine having it any other way. “I’m so glad I made the switch,” she says. “I don’t think we’re going to go back to regular schooling.”

Finding the Homeschool Schedule that Works for You

How Time4Learning Can Boost an Education