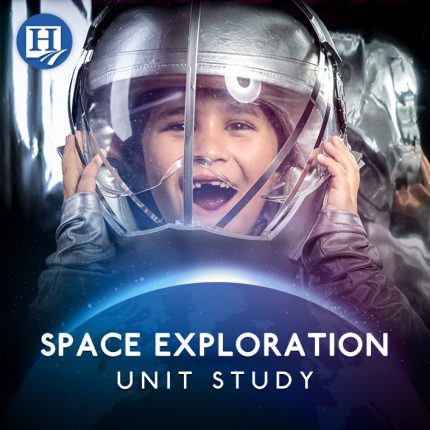 Space. The final frontier… or is it? The study of space, otherwise known as astronomy is a field of study that is nearly limitless. Scientists continually discover new and amazing things in the “great beyond.” And science careers are fascinating.  It’s a great opportunity, but one that starts when our children are young. Awakening an interest in the study of the cosmos, or the world beyond our planet is an important aspect of education.

The study of space is the investigation of everything outside the atmosphere of Earth. Astronomy studies celestial objects (such as stars, galaxies, planets, moons, asteroids, comets, and nebulae) and processes of those celestial objects like supernovae explosions, gamma-ray ray bursts, and cosmic microwave background radiation. (What? There are microwaves in outer space?)

Start your space study with these important space moments!

Soar Higher with an Online Space Study for Kids

One of the great concerns about the study of science and the future of our space exploration lies with our children. Encouraging an interest in the sciences when they are young is an important way to introduce them to something they may love and want to explore as a career. It all begins in the early years. Which is why this online science study for kids in kindergarten through third was born. Let your kids give it a try with the free videos, demos, and printables available.

Learn More About the Study of Space

Looking for something out of this world? Astronomy Books for Kids

Reach for the Stars with Writing Skills

A great way to cement the learning that you’ve done throughout your study on space and astronomy is to use these 6 space writing prompts to encourage a creative response to what they’ve internalized.

Wrap Your Astronomy Study up with Space Games

Jamie Gaddy, B.S., M.Ed., Ed.D. has been a college education professor for over 17 years. Education has been an integral part of her life in both the classroom and as a principal. Six children later found her dissatisfied with traditional schooling and homeschooling became the better fit. She is also a pastor’s wife, remote project manager, and entrepreneur who now homeschools four of her six children (ages 11-17) in southern Georgia. Jamie loves to share about her homeschool experience and help other homeschoolers find success. Connect with her at [email protected]