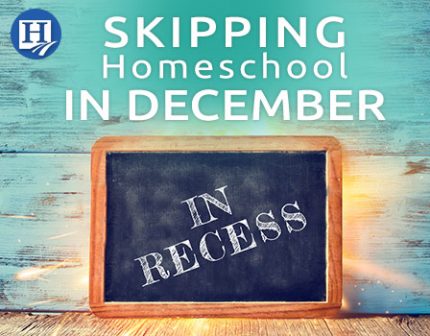 Is the stress getting to you? Are you struggling to get any homeschool lessons completed? It’s understandable for sure – those visions of sugar plums are dancing around in our kid’s little minds – nothing else has a chance! It’s a wonderful time of year – but it’s a lot! Chances are good that you’re busy with holiday festivities, crafts, baking, visiting, and more. If you are one who prefers to take an entire month off – or if you’re even considering it – read on for some great reasons to relax in December!

Summer is Too Hot

You Need A Homeschool Break

If you’ve been plugging away since August, you definitely need the break! That’s nearly four months of homeschooling, and you probably didn’t take any time off during those first four months. Cut yourself some slack and take a break! You deserve it and we’re sure the kids deserve it. Enjoy an extended break that will give you time to recuperate from everything you’ve endured for the past several months. Use the downtime to catch up on anything that fell through the cracks.  You can also use this time to make curriculum changes if that’s the path your family is headed down.

For those who started in August, December marks the midpoint of the homeschool year (assuming you’re doing school until May or June). What better time to take off than in between semesters. You may end up taking off mid-December until mid-January. That’s a full month right between semesters, giving you the chance to catch up or make any changes that need to be made. If you do school from August 15th to December 15th and then January 15th to June 15th, you’d still have about a week or so you could take off (taking random days here and there). You’d get a two-month summer break and could start August 15th for the following year. December truly is a great time for a break! 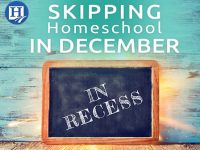