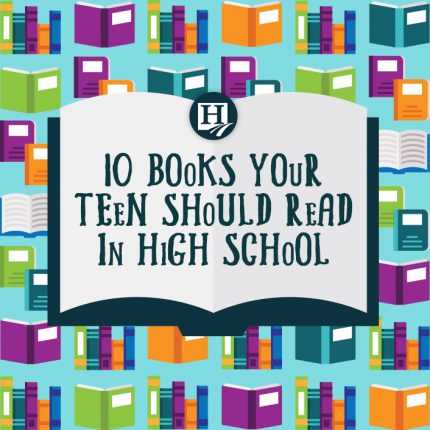 10 Books Your Teen Should Read in High School

With classic literature, I believe some books are meant to be read when you are young and then again later when you are older. The ten teenage books listed below are no exception to this. While most on this book list are meant for a more mature reader (high school age and up), reading them again as an adult reveals the author’s full depth of meaning. These books for teens were chosen for their unique view of life and the main character’s effort toward integrity. I hope your teen (and you!) enjoy this book list.

A classic written by C.S. Lewis, The Screwtape Letters is a narrative between Screwtape, a devil high in the Infernal Civil Service, and his nephew Wormwood who is a young assistant on his first earthly mission. It tells of a young man who has just become a Christian being the target of Wormwood. It is an entertaining recount of spiritual conflict with temptation and the triumph over it.

Written by American writer Ray Bradbury and published in 1953, Fahrenheit 451 is a dystopian novel about America in the future. Values are put on television over literature, and it becomes illegal to own books; any that are found are burned. Montag, a young firefighter who has the job of burning the books, sees what doing so does to the world and tries to create change.

Animal Farm is a classic political allegory by George Orwell. Instead of human characters, barnyard characters portray what life would be like in a socialistic society. It is a dark comedy that illustrates the author’s stark message. It was published in 1945 and reflects the events that led up to the Russian Revolution. Even though it was written long ago, it has insight that can be valuable in present time.

The Catcher in the Rye

The Catcher in the Rye is a coming of age novel written by J.D. Salinger about a teen boy named Holden Caulfield growing up in the 1950s in Agertown, Pennsylvania. The book is written using Holden’s voice telling the struggle, pain and joy of life and relationships.

Set in the farmlands of the Salinas Valley in California, John Steinbeck’s classic, East of Eden, tells a reenactment of the fall of Adam and Eve and the rivalry between Cain and Abel. The story is told through generations of two families: the Trasks and Hamiltons.

In 1949, George Orwell wrote the book 1984 which features a dystopian society 40 years into the future. One of the things Orwell imagined in the future was telescreens which observed those who watched the TV device. The world consisted of three megastates instead of hundreds of countries. The government during this time discouraged any type of free thinking, and this book is where the term “big brother is watching you” originated.

Lord of the Flies

Published in 1952, Ralph Ellison’s Invisible Man tells of the lifelong struggle a black man has in a white America to establish a sense of identity. The author shows the powerful social and political powers that strive to keep black Americans “in their place.” Published before the Civil Rights Act of 1964, the book has been praised for its portrayal of such a controversial subject.

The Alchemist is a mystical tale of a shepherd boy named Santiago that dreams of traveling in search of worldly treasure. Santiago has repetitive dreams about where to find his riches and an old woman tells him to follow the directions from the dream. His journey brings him far more than earthly riches and teaches readers the importance of following their dreams and recognizing opportunities along the path of life

Kurt Vonnegut’s Slaughterhouse-Five was written in a time following the extreme conflict of WWII. Although it is literary fiction, it includes historical, sociological, psychological, science-fiction, and biographic elements. The author has a very unique and unconventional writing style that draws the reader into the world he has created in his book.