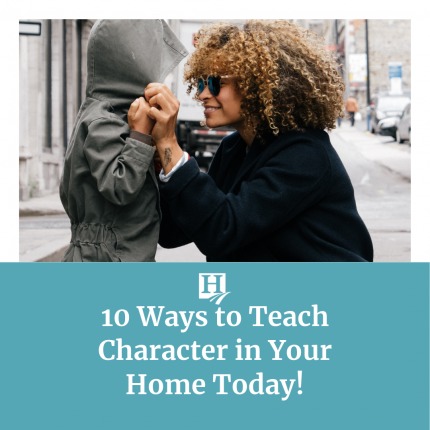 What exactly is character? Webster says that it is the way someone thinks, feels, and behaves. It’s a person’s core. Great character begins at the beginning… It must be nurtured, fostered, and encouraged… Tended to as we would tend a garden! Character counts!

The seeds of good character must be planted.

It begins with a life lived as an example. Remember more is caught than taught. Before children are even ready for complex thought processes, and intricate lessons… they have watched their parents exhibit character. Without us modeling the behavior for them, we are teaching/training in vain. I know that feels like an impossible task, but God hasn’t left us on our own. He’s promised to give us the strength we need! Phil 4:13

I really liked this quote, “To be a good father and mother requires that the parents defer many of their own needs and desires in favor of the needs of their children. As a consequence of this sacrifice, conscientious parents develop a nobility of character and learn to put into practice the selfless truths taught by the Savior Himself.”  ~James E. Faust

Good character traits once germinated, must be tended!

10 Ways to Teach Character in Your Home

Children need to be encouraged in good character. Praise is motivation! Look for ways to “catch them doing good.” Let them know acceptable/unacceptable behaviors. In fact, I encourage parents to be intentional about character training. Start by watching your child, take notes, and determine which character traits he/she needs to work on and make a list of character traits that you want to teach. Create a monthly theme covering one/two character traits. It’s easy to start by talking about what the character trait means, what it looks like with a real-life positive example, as well as a negative example and the natural consequences that would follow, and then talk about ways that it can be applied to daily life. Want to know more? Watch the Homeschooling & Loving It! Podcast Episode 12 on Christian Character Training.