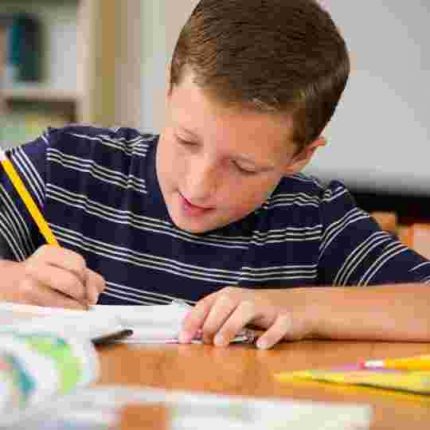 How and Why We Teach Cursive Handwriting

Crystal was my first pen pal and I adored her! She wrote to me in print. It seemed messy and tedious, but I loved her nonetheless. I wrote to her in cursive. Even as a 5th grader, I realized that it flowed so much faster and looked so much nicer! Fast forward 25 years: I’ve had more pen pals than I can remember as far away as the UK and Japan and there are a few that I still write to.

There’s something about letter writing that can’t be achieved by texting, talking, or even e-mailing. Sitting down to write a letter takes thought, inspires your mind, and shows the other person they’re important enough to you that you’ll take the time to sit down and write them a good, old-fashioned letter.

When I told one of my close friends about my pen-pals, he couldn’t seem to understand why I would send a letter in this age of technology. Also a homeschooling parent and a computer geek, he’s very techie, always up on the latest computer gadgets, and tells me time and again, “Celena, books and cursive are things of the past.”  I disagree, these are the most important reasons why we can’t let that be true:

Many source documents are written in cursive handwriting.

The Declaration of Independence. The Bill of Rights. Letters and journals from our founding father and their wives, or anyone who lived long ago. Yes, some of these are printed online and in books, but many of them are not.

There is something significant and inspiring in reading a piece of history exactly the way it was written.

Cursive Handwriting is Better for Your Brain.

A recent study concluded that cursive writing helps train the brain to retain information and fine motor dexterity in a way that typing or even printing cannot. Likewise, that same study showed that 2nd, 4th, and 6th grade students “wrote more words faster and expressed more ideas when writing essays by hand versus with a keyboard.”

Another study concluded that students who type their notes tend to transcribe the lecture and to process the lecture only on a shallow level, while students who take notes by hand actually digest the content and reframe it in their own words – a process that increases both understanding and recall.

A friend recently celebrated her birthday. She’s an adult and wasn’t able to read the cards and notes that were written in cursive! I don’t want that to be my children. It’s such a simple thing to teach, we need to at least give them the tool so it will be there for them if they decide to use it as adults.

All of that leads me to…

How I Teach Cursive Handwriting to My Kids

We Turn Cursive Handwriting Into Art

My daughters especially love art and making things pretty. The night before our first day of school this year, I remembered something I had done on my first day of 6th grade and thought it would be fun to do it with my kids – Rainbow Names. They wrote their names in cursive with a black sharpie and then outlined it in alternating colors of the rainbow. Their names came out beautifully! We hung them up to admire them for the rest of the week and now they’re a gorgeous work of art they’re proud to display.

My kids love doing daily themes. Tomorrow is Friday Fun Day and our surprise theme will be Wizard of Oz. We’ll be watching the movie, using cute cursive practice pages, and playing Wizard of Oz themed games like Bingo and hangman. Educents has a ton of fun themes for cursive, not to mention everything else! I do a search whenever I’m in need of inspiration and I always end up with a list of new ideas.

We Use Cursive Handwriting to Make Gifts or Crafts

For my daughters’ daily cursive practice, we use A Reason for Handwriting. We’ve tried a wide variety of cursive workbooks and this is definitely our favorite. Each week, there’s a memory verse and at the end of the week, each student chooses a scripture border sheet that has a nice picture for them to color around lines for them to write their memory verse on. They make a nice gift for family, or friends, or you can get even more creative by making them into placements for the kitchen table.

We Write to Pen Pals in Cursive Handwriting

As my children increasingly saw me writing letters to my pen pals and receiving letter back in the mail, they wanted to do the same. My pen pal in Texas had three children around their ages, so they became pen pals. Their writing improved because they wanted to write nicely and neatly to their new pen friends.

After my pen pal’s husband teased her saying “I should write a letter to the dad,” he sent my hubby a silly note on foofy paper! It proclaimed, in part-cursive, part-print, “My wife made me do this!” As goofy as the joke seemed at the time, our husbands ended up becoming friends. When our pen pals came to visit last year, it ended up being one of the best weekends of my life.

Not only can you practice drawing cursive at the beach, but you can also draw it into flour, colored sand like the kind you can find in bags at the Dollar Tree, or you can draw it with honey on top of graham crackers to make a tasty treat, or scrawl it across a sugar cookie with squeeze icing. Later this year, we’re going to get crafty and make quill pens and stationery to write cursive the old-fashioned way! 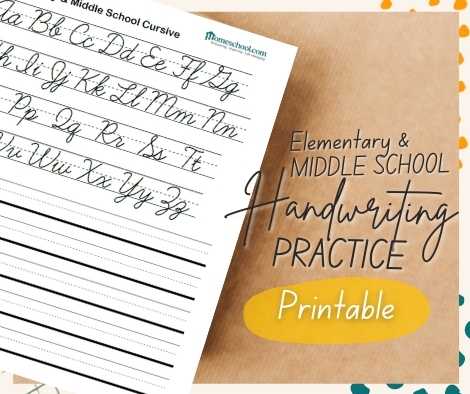 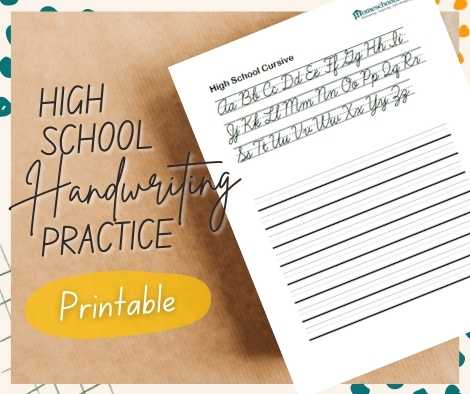 Why Your Teen Needs to Know Cursive

Teaching Writing to Students with Autism